A year amongst the Persians; impressions as to the life, character, and thought of the people of Persia, received during twelve month's residence in that country in the years 1887-8 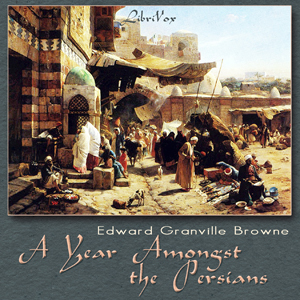 A year amongst the Persians; impressions as to the life, character, and thought of the people of Persia, received during twelve month's residence in that country in the years 1887-8

LibriVox recording of A year amongst the Persians; impressions as to the life, character, and thought of the people of Persia, received during twelve month's residence in that country in the years 1887-8, by Edward Granville Browne.

Edward Granville Browne (1862 – 1926), born in Stouts Hill, Uley, Gloucestershire, England, was a British orientalist who published numerous articles and books of academic value, mainly in the areas of history and literature. His works are respected for their scholarship, uniqueness, and style. He published in areas which few other Western scholars had explored to any sufficient degree. He used a language and style that showed high respect for everybody, even toward those he personally did not view in positive light. In A Year Amongst the Persians (1893) he wrote a sympathetic portrayal of a Persian society which few Westerners had ever seen, including a frank account of the effects of opium. It did not attract the attention it deserved at the time of its initial publication, but after his death in 1926 it was reprinted and became a classic in English travel literature. A Year Amongst the Persians includes moving accounts of the Bahá’í community in Iran. Concerning his meetings with the Bahá’ís of Iran, Browne writes: “The memory of those assemblies can never fade from my mind; the recollection of those faces and those tones no time can efface. I have gazed with awe on the workings of a mighty Spirit, and I marvel whereunto it tends”.

Edward G. Browne referred to Bahá’ís as Bábís, but this was a mistake on his part. Siyyid ‘Alí-Muhammad-i-Shírází (1819-1850), known as the “Báb”, which is Arabic for “Gate”, proclaimed that He was the Promised One of Islám. He declared His mission in 1844 and was executed by the Persian government in 1850. His followers were known as Bábís. The Báb also proclaimed that He was the Gate, Herald and Forerunner of an even greater Manifestation of God who would come after Him, the Promised One of all religions and Return of Christ in the Glory of the Father. In 1863, Mírzá Husyan-‘Alí-yi-Núrí (1817-1892), known as Bahá’u’lláh (Arabic for “The Glory of God”), proclaimed that He was the Promised One foretold by the Báb. By the time Browne arrived in Iran, most Bábís had already accepted Bahá’u’lláh as the Promised One and were now known as Bahá’ís. A small group of Bábís, led by Mírzá Yahyá Núrí, known as Azal, who was Bahá’u’lláh’s younger half-brother, rejected these claims. Azal is notorious for poisoning his own Brother (i.e. Bahá’u’lláh) as well as trying to assassinate other enemies on numerous occasions. While the Báb had made Azal His nominal successor, this was only until the Promised One were to appear, upon which time Azal’s authority was supposed to cease. Most Bábís realised Azal’s depravity and turned to Bahá’u’lláh, whose character and spirituality were unsurpassed. Browne was sympathetic to Azal’s claims but was also impressed by the spirituality of the Bahá’í community. The followers of Azal (sometimes spelled Ezel) were known as Azalís.

While Browne’s sympathetic views on Azal were misguided, he made a great contribution to Bahá’í studies through his translations of historical works and his accounts of the Bahá’í community. Amongst Persians, at a time when nearly the whole nation was highly suspicious of foreigners, and in particular of any British or Russian person due to the political dynamics of that time, Edward Browne was well accepted by the people who knew him and his works. He is well remembered today, and a street named after him in Tehran, as well as his statue, remained even after the Iranian revolution in 1979.

Uploaded by librivoxbooks on February 24, 2011